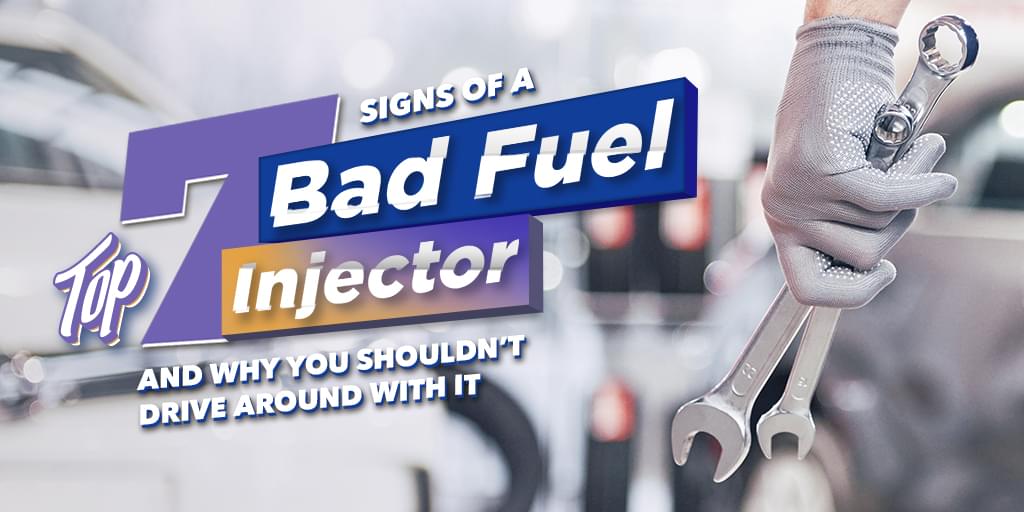 A fuel injector is among the most important components of a modern combustion engine.

It converts liquid fuel into a fine mist, which then mixes up with air inside the engine, creating the much-needed ingredients for your car to keep moving smoothly. But, similar to any other components of an engine, a fuel injector is susceptible to damage and malfunctions.

Knowing the symptoms of bad fuel injectors is the key to catching these malfunctions before they get out of hand.

What Does a Fuel Injector Do?

As mentioned, a fuel injector is one of the main components of an engine.

It receives, converts, and sprays fuel as a fine mist into the intake manifold, where it mixes with air, and is dispelled into the combustion engine, creating the reaction needed to fire up your engine.

The process of converting gasoline into a fine mist is called atomization, and must be completed under high pressure, at the right angle, spray pattern, amount, and time.

Unless it’s dirty, leaking or damaged, a fuel injector achieves this accurately because it’s electronically controlled by your vehicle’s engine control unit. 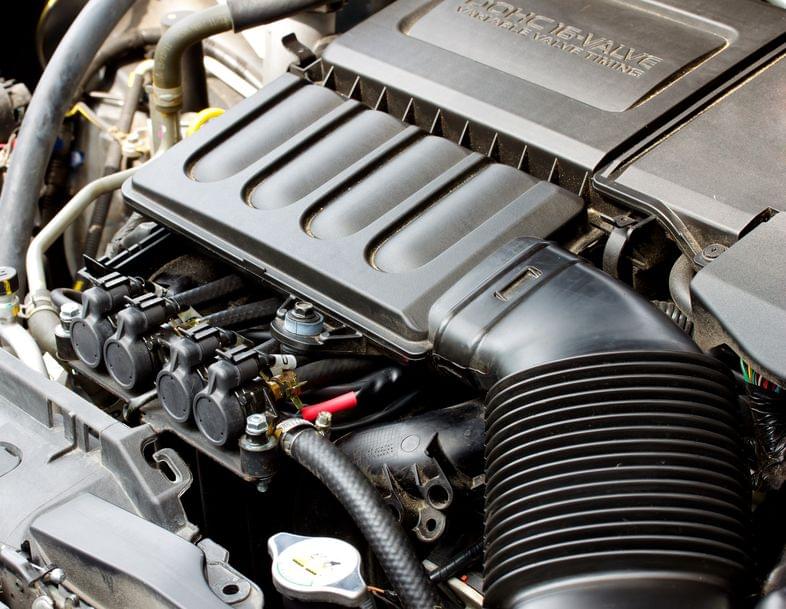 Signs of a Bad Fuel Injector

Since it facilitates one of the most important processes in a combustion engine, a bad fuel injector can really hinder the performance of your car. The good news is that it’s quite easy to tell when it’s damaged or malfunctioning.  To get you started, here are the top symptoms of bad fuel injectors:

1. The Check Engine Light is On

Although there’s a handful of reasons why your check engine light might be on, a bad fuel injector is among the top. Your car’s engine control unit immediately triggers the check light to alert you whenever your fuel injector sprays too much, or too little fuel into the manifold intake.

So, before you dive deep into troubleshooting, scan the code first to confirm whether it’s the case of bad injector. This will save you all the head-scratching and allow you to determine whether you can handle the problem yourself or take your car for service.

If you are having trouble starting your ride, or it randomly stalls or cuts while you are cruising down the highway, then you might need to get your fuel injector checked out. A damaged or malfunctioning fuel injector causes your car to stall because it doesn’t deliver enough fuel to power your engine.

A misfiring engine is one of the top bad injector symptoms. When your car has a misfiring engine, it might continue running, but the engine will stumble after every few seconds, causing an irritating, chugging sound.

If your injector is clogged, leaking or isn’t firing altogether, your engine will misfire because the internal combustion cycle isn’t complete. Your car might also vibrate or shake because the cylinder isn’t receiving enough fuel to fire the engine.

An easy way to solve this problem is by either cleaning or replacing the fuel injector. You should also learn how to change the fuel filter.. An engine may also  misfire due to:

So, before you invest in new injectors, try to identify the problematic injector, and swap it with a functioning one to see if the problem persists. 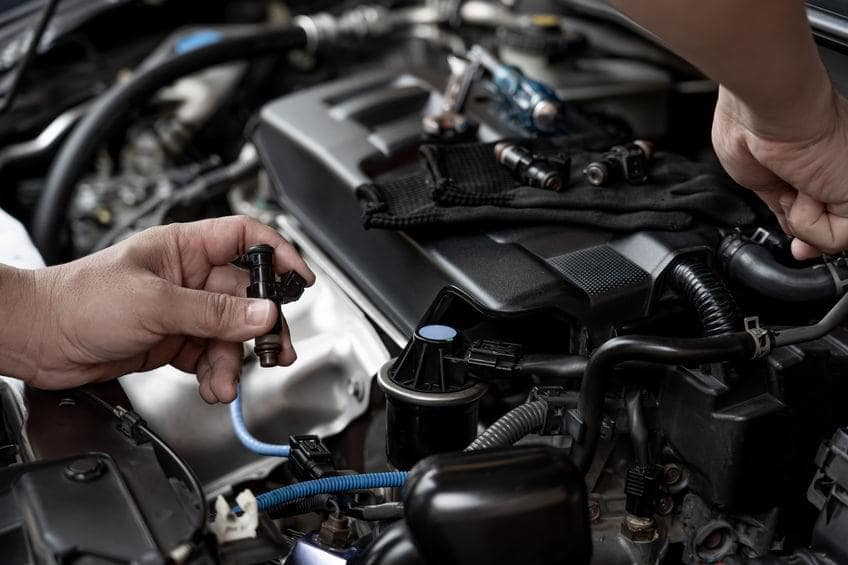 4. Fuel Puddles Beneath Your Car and Sudden Fuel-Like Odor

For a fuel injector to perform its function appropriately, it must spray fuel into the engine at a specific pressure, angle, and spray pattern. If it’s broken or damaged, for instance, if the seals are broken, it leaks fuel on your engine, and on other parts of your car.

If your car has a sudden fuel-like odor, there’s fuel puddles beneath it, you are most likely dealing with a leaking fuel injector, and you need to get it fixed as soon as possible.

When your fuel injector is leaking, or is broken, it releases fuel even when it’s not supposed to do so. This results in transmission fluid leaks, and consequently fuel costs that shoot through the roof. If you’ve been paying too much for gasoline off late, and then you notice fuel puddles under your car, then one of your fuel injectors is most definitely damaged.

Your car may not stall or have problems starting, but if it has a bad fuel injector, then its overall performance is significantly reduced because it’s either getting too little fuel. If you’ve noticed that your car is no longer performing as well as it did when you drove out of the dealership, look out for other symptoms of a bad injector on our list and consider having it serviced.

When your vehicle’s engine receives too much fuel, it might begin to surge because it’s unable to process the extra fuel. This is usually followed by a high than average engine’s RPM.

Can a Bad Fuel Injector Damage Your Car’s Engine?

As noted earlier, your car will still run even with a bad fuel injector. However, it’s not advisable to push it because if the injector is releasing too much or too little fuel, other parts of the engine have to work twice as hard to power your engine. This only causes more problems in the long run and leaves you with hefty car repair and maintenance costs. 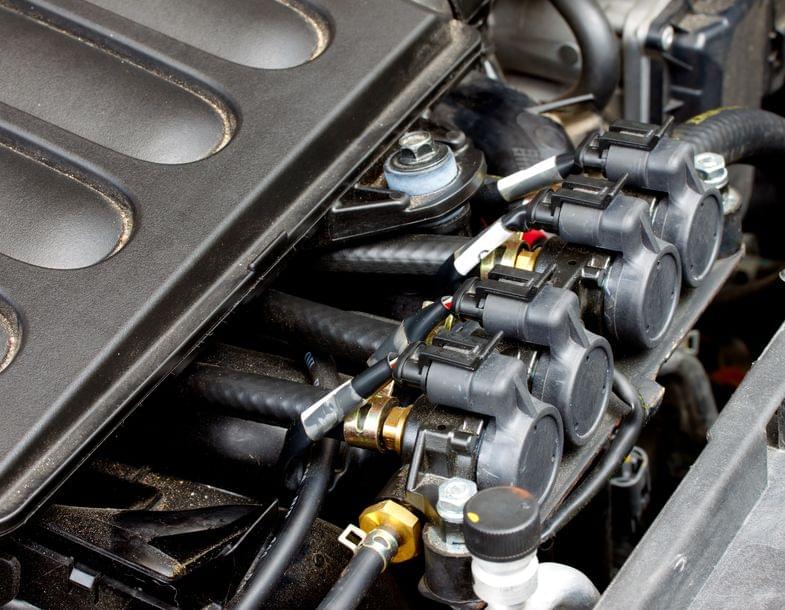 Dealing with a Bad Fuel Injector? Let Us Help

A damaged injector is undoubtedly bad news. If your car displays two or more of the symptoms of bad injectors above, you have two options, either clean it or replace it.

If your car is old and the problem persists even after you do that, it might be time to accept that your ride has had its run, and it’s time to let it go.

On the bright side, you can still make some good cash out of it by selling it for parts, or to a reputable junk car for cash company like US Junk Cars.

Drop us a line for more details today.